It has been a jam packed couple of days.  Yesterday (Day 33) we basically finished sorting, cleaning, and organizing the new puppet trailer.  There are so many wonderful “tools” for ministry, aside from the 69 puppets.  There are costumes, games, bubbles – everything you need for a big neighborhood fiesta!  The Georgia group may use it this Friday to celebrate the end of their water line project.

Kathie and Toni took us to a huge wholesale outdoor market where we picked up 100 lb bags of rice and beans for a local ministry (more about it below).  You could buy just about anything there – meat, produce, spices, candy, clothing, etc.  One of my favorite sections had bins full of dried herbs, perfect for making custom mixed herbal teas, if only I knew more about the proper proportions and concoctions.

Later, Marcial took Jacin to a local repair shop to have the Tundra’s tires rotated.  I cost 100 pesos, or roughly $8.50.  The truck also has a “thump in its giddy-up” (please excuse the female description; there are so many GIGANTIC speed bumps here, and you can hear a thump every time we go over them), but it wasn’t the quick and easy fix Jacin was hoping for, so we will have to figure out how to handle it when we get back to the states.

Puente de Amistad ministers each Monday evening to homeless people at a place referred to as El Mapa.  This is where anyone who is deported and bussed out of the US is dropped off.  Often these people end up living there, in whatever makeshift “houses” they can gather together.  The majority of them end up using drugs and alcohol to numb the realities of being destitute.  There is a local rehabilitation house called Cruisin for Jesus (whose church we attended last Wednesday evening) who ministers to these men on a weekly base as well, feeding them and telling them about Jesus.  They encourage men to give up the drugs and alcohol and come home with them, where they use prayer and support to detox.  They provide bunks and clothing, as well as food (that they depend on God to provide) to the men.  In exchange, the men are contracted to work (many of whom have training in construction trades) for the community at a reduced rate, and the money they earn goes into the pool to support the entire ministry.  Cruisin’ for Jesus supplies several men each week to accompany Puente to El Mapa.  Last night we (along with the Puente leaders and the Georgia group) attempted the weekly trip, but several blocks were shut down (we heard rumors of murders earlier that day near the area we were going to serve, though this hasn’t been confirmed), so after an hour and a half trying to get out of the traffic, we finally got to the hospital and fed the needy there.  Often, when people are checked in to the hospital, their family cannot afford to stay anywhere, so they sleep in their cars out on the street.  For instance, we met a mother last night whose son had been in the hospital for the last 4 months.  She was with her young daughter, staying wherever she could.  Along with these unfortunate people, we were able to feed several homeless people who happened to be in the area while we were there.  It did not take long to clean out 150 hot dogs and oranges.  We were able to pray with people and minister to them, just loving them and assuring them that God was with them in their need.

Jacin was up early for the second morning in a row helping Amalia with her breakfast and lunch preparations for the group.  Amazingly, the kids and I haven’t even heard people moving about, and we get up only to find the house almost empty.  It has been interesting sleeping so hard!  We did some more cleaning and basic maintenance around the base.  As it turns out, money that comes through Puente de Amistad is generally earmarked for other local ministries (which is truly the point of the ministry), so we are constantly finding that tools, kitchen items, cleaning, items, etc, are old, broken, or otherwise outdated.  We picked up a few things today for the base as we were out shopping for Juan and Alma.  Jacin took Justice back to the wholesale market in an attempt to pick up 50 lb bags of rice and beans for Juan and Alma.  They found out pretty quickly, though, that as soon as the vendors realized they couldn’t communicate well, the price increased – they were going to be charged as much for the 50 lb bags as we were charged for the 100 lb bags the day before.  So, they ended up finding a better deal at a local Sam’s Club.

We later dropped off the 100 lb bags of food (complements of Justice), along with donations of bread and eggs from Puente, to the Cruisin’ for Jesus rehab.  It is basically a small plot of dirt in a neighborhood with a few building on it.  The men have an outside shelter under which they cook over a wood fire, and just behind this is their makeshift laundry room – six buckets of water and a few ropes for clothes lines.  Carlos, who assisted with the feeding the night before, gave us the quick tour.  He has quite a story of his own:  he was a gang-banger in LA until he was put in jail and eventually deported.  It was through the Cruisin’ ministry that he came to know Christ.  Now he commits his entire life to helping others find their way.  He has three daughter in the US that he sees every now and then, and as hard as that must be, he is thankful every day for the way things turned out simply because he now knows the Lord and he is able to do God’s work here helping men who are walking in the shoes he took off not so long ago.  He is truly a blessing to be around.

After the Cruisin’ delivery, we made yet another stop at a shopping center to pick up shoes for Juan Sr.  We also grabbed a few shirts and other clothing items for Alma, just to bless a mother who puts the needs of her family first.  We also grabbed some eggs and fruit, then headed to their house.  We went through another round of charades, trying to communicate.  The kids never have a problem, as play time doesn’t seem limited by the language barrier.  Alma gave us a card when we left, basically voicing their gratitude (although I haven’t translated the whole card yet :)).  They are such a loving family with amazing smiles, and as hard as it must be to accept things they cannot always afford on their own, they did not seem embarrassed, but just grateful.  We have grown to love them so much, we could adopt them (perhaps we already have).  We plan to stay in better touch with them after we’re gone, and we hope to return again, with better Spanish under our belts, and be able to visit with them and really get to know them. 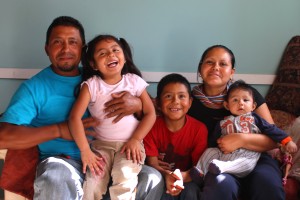 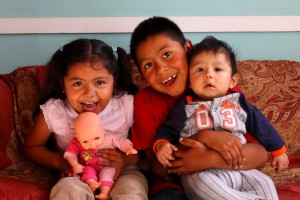 (These pictures do not do this family justice.  They have some of the most amazing smiles!)

Last, we headed back to the base to help with dinner for the Georgia group.  Amalia never ceases to amaze us with her abilities to cook food for large groups of people.  It was also one of the group’s men’s birthday today, and she made a cake for him (with Justice on frosting duty).  After dishes, and some dishes, and then a few more dishes, we are headed to bed, looking forward to another early morning (at least for Jacin), and a busy day at Casa Hogar Dibujando Sonrisa.

Have a blessed night!