We will try to recap the last week as painlessly as possible.  We are finding that it is easy to get through a day and be too tired to do much more than crash.

Day 36 – Nation’s 10th birthday!  Nation had looked up the following phrase earlier in the week and been practicing it, so was VERY eager to be able to say it to as many people as possible:  “Hoy es mi cumpleanos” (today is my birthday)!  Amalia helped Justice make a chocolate cake from scratch (finding cocoa powder took 3 store visits!), and Justice decorated it with several colors of homemade frosting (sour cream as the main ingredient), chocolate shavings, sprinkles, chocolate chips, and chocolate syrup.  Marcial graced Nation with the traditional birthday song at lunch.  After dinner, Nation opened his gifts:  toe socks, a hunting knife, and kinder eggs – we are grateful that our kids are so easy to please!  We then attempted to find a movie in English, but the only ones in the theatre were far from kid friendly, so 2 movie theatres later, we decided to hit Wal-Mart and let him pick out a DVD.  He chose Rio, and we headed back to base, where the Georgia group helped us to celebrate with a nice face-in-the-cake end to the day (while everyone chants, “Mordita, mordita!”).  We watched about half of the movie before we couldn’t hold our eyes open anymore. 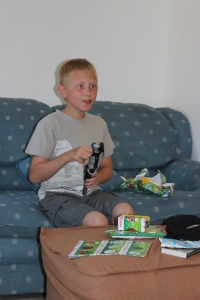 Day 37 – We helped the Georgia team wrap up their project by preparing for a neighborhood fiesta and putting up a playground and soccer goal posts.  They cooked hot dogs and burgers on new BBQ grills they installed the day before.  The neighborhood kids played games, knocked open a couple of piñatas, and joined their families in a meal wrapped up with cake.  It was a long, hot, dusty day, and we were all pretty exhausted when we got back to base. 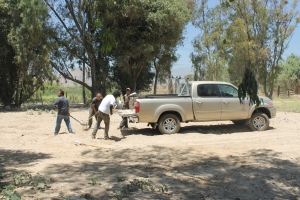 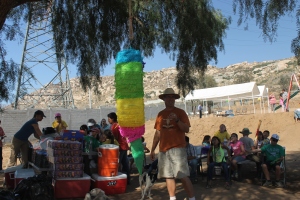 Day 38 – Saturday – The Georgia team left for home early in the morning, and we helped Amalia prepare the rooms for the group coming later in the day.  Amalia’s grandson, Angel, had come along to help Amalia (he mostly enjoyed Nation’s company as they played games together), then Jacin took all three kids to the market while Danielle worked.  After the market, Nation did not feel well, so he ended up sleeping the rest of the day, giving us all an excuse to take it easy.  Even though it was a fairly light day, we all slept hard enough to not hear the group that came in late that evening, great people from Open Bible church in Boone, IA.

Day 39 – We went to church with Marcial in a building that used to be a boxing ring.  They have a section where you can plug in headphones and listen to the sermon in English.  The chairs were pretty close to the speakers, so it was difficult to make out the entire sermon, but it was great to be able to catch the gist of it after having so many weeks without “real church”.  After lunch, we decided to cross the border to check our voicemail, check in with Greg regarding our RV, and grab a few thing that we hadn’t been able to find in Mexico (or possibly did find but didn’t know it 🙂  ).  When we checked the website before we left, it looked like our wait to get across would be just over an hour.  It actually ended up being 3 hours on the nose.  There are so many vendors in the line to cross that you could just plan for dinner and dessert while you wait, as well as picking up last-minute gifts for anyone you may have forgotten.  Our first stop was McDonald’s because we all had to use the bathroom so badly and it was the first place we saw.  We were reminded very quickly how spoiled we had become by the good service in Mexico, where even though we cannot speak the language well, the vendors are always so willing to help.  Not so in the US!  We hit a few stores and touched base with our moms.  It was refreshing to be able to read and understand all of the signs, find everything we were looking for, and just hear from family.  We also experienced our first two-level Wal-Mart, where you ride the escalator next to your shopping cart, which has its own lift.  The border crossing back was easy and uneventful, and we called it a night in order to be rested for Monday.

Day 40 – We went with the Iowa group to help with their house building project.  Several of the team members had built several of the Puente homes in years past, and they had a very efficient method to everything.  Even the teens jumped right in and were great.  We had all four walls up with the floor joists in by the end of the day.  It was a lot of work, but so rewarding to see how much could be accomplished with such a great team!  The home is being built for Balbina, a single mom, and her 2 teen boys, the younger of which (and Balbina, due to her unfaithful ex-husband) has AIDS.  The family was very involved and helpful throughout the day, painting and doing whatever else they could. 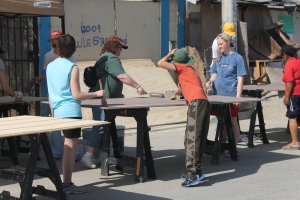 Day 41 – Jacin went with the Iowa group and roughed in the electrical for the house, then helped frame the roof.  Danielle and the kids stayed back and helped Amalia with curtains for the new home as well as general projects around base, and Danielle put in a few hours of work.  We were incredibly blessed to find out that Jacin’s relatives sent a generous donation to fund the concrete project at Sion orphanage.  We will be in contact with Jorge and start planning tomorrow.

Day 42 – The Iowa team was far enough ahead that they didn’t require Jacin’s assistance on the house, so we went with Kathy to Sion to talk with Jorge about the concrete.  He had arranged to have a few men who will be assisting meet us there.  Based on what they believe the materials will cost, we should have money left over, and we’ve obtained permission to use the remaining funds for whichever projects God brings to our attention.  This is an answer to prayer, because we were starting to question God about how long we are supposed to be here, whether we were somehow delaying the start of Jacin’s career by not being in the US.  But God made clear that he intends for us to be here a while longer, because we have funds that now need projects.  Please be in prayer with us about what our next one should be, because there is need everywhere, and it is difficult at times to discern what would be the most effective use of our time and resources.  We scheduled our concrete project for two Saturdays from now, so that his men have enough time to prep the ground and get all of the materials together.  Everything has to be mixed by hand, so we are grateful that he has many able-bodied boys at the orphanage to help.  Many hands make light work!

After our meeting, we went with Kathy to a men’s hospice house to deliver donations.  The house is run by a woman who completely depends on the Lord to cover all of the facility’s needs, because she receives no government assistance, and the men (generally older without family to care for them) do not have resources to contribute.  The home is on a hillside that overlooks Tijuana, and it was so peaceful.  It was so clean and the men we met all seemed very content and well cared for.  A team a while back built the men an elevated raised bed garden so that the men in the wheelchairs could tend to it.  They had tomatoes, peppers, chiles, cilantro, and onions growing – all the fixings for a great salsa!    And quite unexpectedly, we met a man there from Watertown, SD, who had moved to Mexico a while back with his wife, and is now single and suffering from a blood disorder.  What a small world!  We could definitely see spending some time up there, visiting with the men and just helping wherever it is needed.

We then headed to the building site and feasted on chicken salad provided by Balbina.  We were just in awe of how a woman who has next to nothing would insist on sharing what she had with a large group of people.  Their hearts are so big here!  Jacin offered his truck and time to take the Iowa women (and Justice) shopping for items for the house, and Danielle stayed behind and worked while Nation kept himself busy playing guitar and wandering around the base.

Blessings until next time…